Mama Lotties has been shortlisted top 5 from 205 nominations in the Self Published category, a first for Gibraltar.

76 Mama Lotties, Gibraltarian Inspired Recipes  has been nominated for the Gourmand World Cookbook Awards 2015, considered the ‘Oscars of gastronomic literature’. Created by Edouard Cointreau in 1995, honouring the best books on cooking and wine from around the world, Mama Lotties was shortlisted Top 5 in the selected category, from 205 other nominations and will announce its verdict on 9 June in Yantai, China.

The book is a compendium of recipes of traditional Gibraltarian cuisine reflects the influence of multiculturalism of local society in its gastronomy. The book, 160 pages illustrated in full color, including starters, main courses and desserts. The recipes combine Gibraltar typical dishes such as Calentita, Rosto or Torta de Acelga with others influenced by the cuisine of the nationalities living in Gibraltar.

“Someone will probably tell me that a dish is Spanish,” says the author, “and they may be right, but that is something that identifies our kitchen”. “I want to convey that, although we are different countries, there is a mutual influence and it’s nice that two countries with different cultures are so close and at the same time retain their own identity.”

The first English edition was published in October 2014 and since then has sold 1,400 copies, most in Gibraltar, with a population of 30,000 inhabitants. The work has just been translated into Spanish and is for sale at major bookstores in Gibraltar and Amazon or directly from our shop.

Mama Lotties is BACK on your screens!

This site uses Akismet to reduce spam. Learn how your comment data is processed. 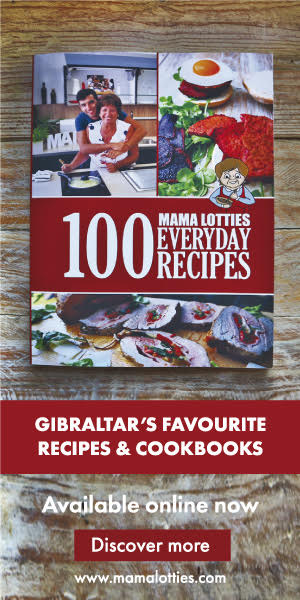 An Evening at The Lounge

Help us create more recipes by supporting our passion so we can create new tasty things, any little helps.